If you haven’t tried golden milk yet, you’re missing out since it’s a creamy yet lactose-free, hot milk drink that is packed with nutrients.

Sometimes you can combine health goals and deliciousness after all!

What Is Golden Milk?

Golden milk or turmeric milk is a traditional Indian drink currently gaining popularity in the Western world due to its potential health benefits.

Accordingly, it is known in India as an alternative remedy to strengthen the immune system and relieve ailments, such as:

The warm golden yellow drink is a lively mixture of heated almond (or coconut) milk, turmeric, ginger, and pepper.

Accordingly, turmeric milk can cheer you up in the morning, calm you down in the evening, or ease sore throats.

Also, many people drink golden milk instead of dessert, as some recipes contain cinnamon and honey.

However, those who drink golden milk for its health benefits should avoid honey and cow’s milk.

Either way, turmeric is the dominant flavor in the warming drink. Although the root itself is not spicy, its earthy taste is a sound basis for other spices. For this reason, it’s curry powder’s main ingredient.

Moreover, ginger and pepper do not taste dominant in this traditional recipe, as they bathe in creamy turmeric milk. If you find golden milk bitter, I recommend adding cinnamon.

Besides a certain sweetness, the Christmas spice also has positive health effects, so you don’t have to economize with it.

Since golden milk is an alternative remedy of Ayurvedic medicine because of its numerous benefits, here are 9 science-backed reasons why it can be healthy.

The ingredients for this simple golden milk recipe are the perfect mix yielding natural anti-inflammatory properties.

Turmeric is the essential ingredient of golden milk. This yellow spice, popular in Asian cuisine, gives curry, for example, its yellow color.

Due to curcumin, a primary turmeric compound, the root has strong anti-inflammatory properties and bright orange color.

Accordingly, studies even claim that curcumin’s anti-inflammatory properties have medicinal qualities without the undesirable side effects of common drugs (Lao et al. 20061).

Against this background, chronic inflammation is a significant contributor to the development of ubiquitous diseases, such as

Although curcumin itself is already one of the most potent, purely natural anti-inflammatory compounds, it can have an even more substantial effect combined with black pepper.

Because there is piperine in pepper, it can increase the absorption of curcumin by the body by a factor of 20 (Shoba et al. 19982).

In addition to the centuries of use in Ayurvedic medicine and many animal experiments, human studies now confirm the anti-inflammatory benefits of curcumin (Chainani-Wu 20033).

Besides turmeric, part of the ginger family, golden milk benefits from the effects of ginger.

As studies confirm, ginger is such an anti-inflammatory food that it can even replace drugs. However, ginger causes significantly fewer side effects (Grzanna et al. 20154).

The curcuminoids in turmeric have outstanding antioxidant properties in addition to their anti-inflammatory effect.

For this reason, Ayurvedic medicine has been using turmeric for centuries (Nagpal et al. 20135).

Nevertheless, the real powerhouse is the main ingredient, turmeric. With an ORAC value of over 127000, it gives golden milk the potential to prevent cell damage.

Free radicals are compounds that carry an additional oxygen molecule that causes damage to tissues with which it comes into contact.

With this in mind, curcuminoids can scavenge free radicals more than five times stronger than vitamins C and E. Moreover, they can absorb the free hydroxyl radical, which is considered the most reactive of all free radicals (Menon et al. 20078).

Consequently, these health benefits of golden milk can help to ward off many diseases from bronchitis to insulin resistance to depression.

Due to our sedentary work style and high stress levels, more and more people suffer from pain.

Again, curcumin can help, as it can mitigate the following types of pain:

Moreover, the ginger in golden milk is also known for its effect against severe menstrual cramps and postoperative pain (Rayati et al. 20179).

4. Fights Off Bacteria and Viruses

As golden milk is often used in India as a household remedy due to its effect against colds, it is considered to strengthen the immune system.

Also, for biohackers who want to increase brain power, the benefits of golden milk can help. On the other hand, it can also help to prevent age-related dementia.

For this reason, curcumin can help with depression, stress, and even Alzheimer’s disease (Mishra et al. 200818).

So if your goal is to improve performance at work or university, there are good reasons why curcumin could help.

According to countless studies, curcumin is a promising means of preventing cancer and effectively limiting tumor growth (Takada et al. 200424).

Besides, anticancer properties are one of ginger’s health benefits (Poltronieri et al. 201426).

Nonetheless, caution is paramount in the prevention and treatment of a disease like cancer.

Therefore, always follow the recommendations of the doctor you trust.

Let’s stay with ginger and cinnamon because these ingredients can help to lower blood sugar levels too.

Accordingly, even the daily addition of fresh ginger to tea can lower the blood sugar level by more than 10%. Moreover, studies have shown that ginger can reduce hemoglobin A1C, a long-term blood sugar indicator, by 10% (Khandouzi et al. 201528).

However, you must be aware that turmeric milk only has a chance of lowering blood sugar if it is unsweetened. Besides honey, cow’s milk in golden milk also can cause blood sugar to spike.

For this reason, I recommend using almond or coconut milk instead. The latter also makes the golden milk exceptionally creamy.

The addition of cinnamon, however, can have a positive effect on blood sugar. For example, even less than 5 grams of cinnamon per day can lower blood sugar levels by almost 30%.

Heart disease is the number one cause of death worldwide. Nevertheless, it is in your hands to prevent heart disease.

Once again, it is the curcumin in golden milk that can prevent heart disease due to its anti-inflammatory and antioxidant properties.

Our skin serves as the first line of defense against viruses and toxins in our environment and a primary organ for the body’s detoxification.

Thus, and due to the influence of unnatural foods, many people suffer from skin problems.

For this reason, soaps and other skincare products containing turmeric are flooding the market.

As a spice, tea or milk, turmeric is generally considered safe and can be consumed without severe side effects.

Accordingly, most studies on the effects of turmeric and also ginger report few to no side effects, although they perform better than commercially available drugs (Lao et al. 200636; Grzanna et al. 201537).

However, some people may experience the following side effects in isolated cases:

However, these rare side effects of golden milk are usually associated with excessive consumption.

For example, this can happen through the additional intake of turmeric supplements, so they are not suitable for pregnant women in particular.

Because of the potential high dosage, supplements can promote gallstones or kidney stones due to turmeric oxalates.

Moreover, some people may be allergic to turmeric, although turmeric allergies are relatively rare.

When Should I Drink Golden Milk?

When you should drink turmeric milk depends on your individual everyday life.

Unless you are on an intermittent fasting schedule, it is a warming eye-opener in the morning that can replace breakfast.

Moreover, golden milk can be a healthy alternative to desserts and round off both lunch and dinner.

Furthermore, the golden milk is related to turmeric tea and its effects, so it is also drunk in between at tea time.

In short, you can hardly use any other drink in so many ways.

How to Make Golden Milk

In my experience, (canned) coconut milk and unsweetened almond milk are the perfect basis for creamy golden milk.

Besides, coconut milk and coconut oil can add healthy fats to the drink, which allows the body to better absorb curcumin due to its fat solubility.

Since I have tried fresh and ground turmeric, I have to say that the latter even has a better taste.

Furthermore, canned coconut milk should be oil-free but still have a high natural fat content, which makes the yellow turmeric milk creamier. 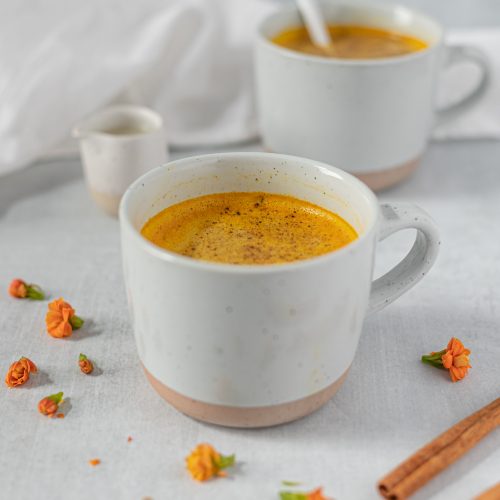 Although it is not a miracle cure that can replace professional treatments, many people have had good golden milk experiences as a natural remedy.

According to studies, it can reduce the risks of those diseases that are significant causes of death. The preventive benefits of golden milk range from cardiovascular diseases to cancer to neurodegenerative diseases such as Alzheimer’s.

However, do not buy ready-made mixtures, as the ingredients will hardly flatter your health.

Moreover, golden milk is healthy if it is unsweetened and prepared neither with oat nor cow’s milk, as these ingredients cause your blood sugar to skyrocket.

Is it good to drink turmeric milk everyday?

On the one hand, drinking turmeric milk every day can have various health benefits. On the other hand, according to research, it hardly has side effects unless you take high doses of turmeric supplements.

Can you drink golden milk everyday?

Unless they are allergic or already take high doses of supplements, most people can drink golden milk daily.

Does Golden milk help you sleep?

If you use high-quality coconut milk, add coconut oil, and don’t use honey, sugar, or sweeteners, golden milk can help with weight loss.

13 Foods High in Omega-3 Fatty Acids and Their Benefits