Pizza is one of the most consumed foods in the Western world. For some, life without pizza is unimaginable. Unfortunately, it is not healthy.

So do you have to give up pizza when you start a low-carb or keto diet?

Not necessarily! You can find out how it works here.

But therein lies the problem with the pizza we know from Italian. Such a pizza dough can quickly bring a concentrated load of carbohydrates into our bodies and spike blood sugar.

On the other hand, the toppings make the hearts of keto enthusiasts beat faster: Full-fat cheese, low-carb veggies, omega-3-rich fish, juicy meats, and savory sausage. I probably don’t need to list the ingredients to clarify that most toppings are keto-friendly.

The proportion of carbs in the pizza crust determines whether pizza is suitable for a low-carb diet like the keto diet.

That’s why we’re now taking a closer look at the carbohydrate content.

100 grams of an average (fast food) Pizza Margherita provides us with the following macronutrients (*):

Therefore, for conventional pizza with cheese, we get a ratio of fat to net carbs of about 0.29.

After one piece has about 103 grams, it’s enough to throw you out of ketosis. In the end, the tolerance level for the entire day is about 25 grams of net carbohydrates.

Okay, that was the fast-food version from a pizza chain. But what about homemade pizza?

100 grams of homemade pizza gives us about the following macronutrients (*):

The homemade pizza shows almost no calories, protein, and fat difference. It was only able to reduce carbohydrates slightly.

Even though we don’t have a fiber figure here, the net carbohydrate value won’t improve significantly.

Finally, the flour is highly refined and therefore low in fiber. In addition, it has a high glycemic index and thus spikes blood sugar and insulin levels.

Is Pizza Keto-Friendly at All?

Pizza made with conventional flour cannot be keto-friendly. Even if you make it at home, the insulin response of one slice will be big enough to throw you out of ketosis immediately possibly.

Fortunately, ketogenic diets are nowhere near as restrictive as their reputation. As a result, various alternatives exist that you can use in place of regular flour to make a keto-friendly pizza crust.

To make a pizza low-carb, you need to replace the main ingredient – flour – with a substitute.

Surprisingly, there is a wide range of pizza crust alternatives for the keto diet. The following substitute has already proven itself in a low carb pizza:

In addition, there even exist chicken crust alternatives for the Carnivore Diet that are completely plant-free and keto-friendly.

However, my low-carb favorite among pizza dough substitutes remains cauliflower. This result is based on five simple reasons:

If you’re still short on time for a simple recipe, I came across a ready-made low-carb pizza crust that’s top-notch for the keto diet—more on that after the recipe.

Cauliflower is the absolute jack of all trades when replacing high-carb foods. From rice to puree to pizza, it brings the right texture, flavor, and health benefits to a ketogenic diet.

With this crispy low-carb pizza crust, you no longer have to do without pizza on keto. And you don’t have to skimp on the cheese either! 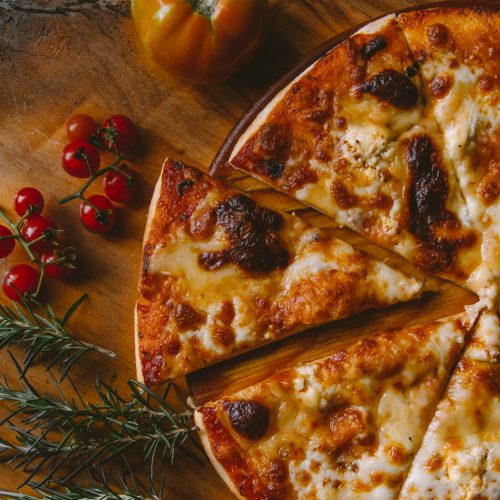 In my opinion, the best ready-made pizza crust on the market is 100% keto-friendly and comes without unnecessary additives.

You Don’t Have to Give Up the Good Stuff

I can only smile when people tell me that ketogenic diets are too restrictive. On keto, you can still eat the majority of all-natural foods.

Delicious vegetable variations, juicy meats, luscious sauces, tempting snacks, and desserts – there’s not much you can’t eat on the keto diet, as long as you got the knowledge.

Avoiding those commercial dishes that have made the Western world sick and fat is only legitimate. In the end, it’s all about establishing a sustainable healthy lifestyle to enjoy each day at its highest physical and mental quality.

This crispy low-carb pizza crust recipe is proof that you don’t even have to give up delicious fast food to live longer and healthier on a ketogenic diet.

Is there any keto friendly pizza?

There are a lot of low-carb pizza recipes that are keto-friendly. Find the best keto pizza crust recipe in this article.

While Blaze Pizza is the first chain to sell a keto-friendly option, I cannot recommend it since they use brown rice for their crust. Instead, check out the recipe in this article.

What is the best pizza for keto diet?

The best pizza for keto is made with my low-carb cauliflower pizza crust recipe. Please find it in this article.

Can I eat pizza without the crust on keto?

Eating pizza without the edges of the crust does not suit a keto diet since it can kick you out of ketosis. But just eating the pizza toppings is okay on keto.

Keto Diet for Beginners: How to Start LCHF With a Plan