Still considered a staple by many, conventional milk is one of the first foods to leave the fridge on a ketogenic diet.

For this reason, keto beginners often look for a suitable alternative to cow’s milk. Contrary to popular belief, even whole milk is a high-carbohydrate food that can throw you out of ketosis.

In this context, almond milk is one of the first cow’s milk substitute options on the keto diet.

Therefore, if you’re wondering if almond milk is allowed on low carb and keto, you’ve come to the right place. Based on studies, nutrients, and ingredients, this article will tell you how suitable almond milk is for the keto diet.

Almond milk has recently gained a massive reputation as keto-friendly milk. It is made from almonds without the need for a complex chemical process.

Although it has a nutty flavor, the almond taste does not intrude prominently at all. It is also lactose-free, vegan, and free of lectin-like milk proteins.

The popularity of almond milk has meant that you can find it in the grocery store in a variety of forms:

Later, we will take a detailed look at the different compositions’ influence on the nutrient profile of almond milk.

Ultimately, the ingredients determine whether almond milk is low-carb and therefore suitable for the keto diet.

In addition, almond milk can contain nutrients that can boost your health. That’s why many health-conscious people also prefer this milk over other products.

Almond milk is made from a nut that is rich in nutrients. For this reason, it can score high in the following vitamins and minerals (*):

Especially the latter vitamin is present in a remarkable concentration in almond milk.

Provided that it is natural almond milk, obtained only from almonds, the following health benefits can also be associated with it:

The essential aspect in which a cow’s milk substitute must score in the keto diet is reducing carbohydrate content.

High insulin levels not only throw you out of ketosis but generally inhibit the enzyme that can break down body fat (Meijssen et al. 20014).

Not all almond milk is created equal. It is therefore evident that there are significant differences between the products available on the market.

Complicating the situation with almond milk is that there are soon more fake products than genuine almond milk. These almond drinks are usually soy or rice-based and have a fundamentally different nutritional profile.

Let’s start with the average almond milk from the supermarket.

Does Almond Milk Have Carbs?

100 grams of conventional almond milk from the grocery store gives us the following nutritional values (*):

Almond milk from the supermarket thus has a ratio of fat to net carbohydrates of about 0.35. Accordingly, carbohydrates dominate commercial almond milk.

To make matters worse, the 2.9 grams of net carbohydrates are all sugar.

As part of our keto check, it makes sense to compare almond milk to cow’s milk, which it should replace.

100 grams of whole milk from the supermarket gives us the following nutritional values (*):

While cow’s milk has almost twice as much sugar as conventional almond milk, it also has more fat. Thus, it comes to fat to net carbohydrate ratio of 0.62.

Shockingly, this is a better value than that of almond milk. Unless it is specifically labeled as unsweetened, almond milk is not ideal for the keto diet.

However, you can ultimately distinguish sweetened from unsweetened almond milk just by looking at the nutritional values.

Although macronutrients vary by manufacturer, on average, unsweetened almond milk contains so few carbohydrates that you can safely drink a cup or two of it.

Accordingly, the unsweetened almond milk in our example adds only 1 gram of net carbohydrates to the cup.

Considering that the ketosis tolerance level is 25-50 grams of net carbohydrates per day, the milk substitute is entirely safe.

On the other hand, what about flavored almond milk?

In terms of nutrients, the unsweetened vanilla almond milk hardly differs from the classic unsweetened version. In our example, the vanilla option scores with a higher fat content and a better fat-to-net carbohydrate ratio.

However, the sweetened variant from the same manufacturer would give us a completely different result with just under 6 grams of sugar per 100 millilitres (*).

Nonetheless, we should look at the list of ingredients for the unsweetened option as well. In any case, we may be interested to know where the vanilla flavor comes from.

According to the United States Department of Agriculture (USDA) database, the vanilla almond milk in our example consists of the following ingredients (*):

That’s quite a lot of emulsifiers, stabilizers, flavorings, and other additives for something as simple as almond milk, which is just water and almonds, as the ingredient list has already indicated.

Plant-based creamer substitutes are now experiencing a lot of hype. However, once again, it is crucial to distinguish sugar-free from standard almond milk products.

In short, creamer and barista almond milk with sugar are not keto-friendly at all.

The comparison shows that the range is wide. In any case, sugar-free creamer and barista products made from almond milk are keto-friendly in terms of carbohydrates.

However, I would generally advise against these products. Why?

A look at the ingredients of the same unsweetened product will tell us (*):

When a product naturally contains less fat, something else must be added to maintain the taste and creamy consistency. These necessary additives fundamentally alter the nutritional profile of barista almond milk.

There are often numerous stabilizers, emulsifiers, and potentially harmful preservatives, and sometimes even highly-processed vegetable oils.

Such food additives can affect carbohydrate and fat metabolism, so they are significantly involved in the development of obesity (Paula-Neto et al. 20175).

Which Almond Milk Is Best for Keto?

Even more important than identifying the best almond milk is to avoid the worst varieties. And those are the ones that are soy-based, rice-based, or made with oat milk.

Not only are these highly processed almond drinks often richer in carbohydrates, but they are also bad for gut health due to the lectin content of these plants.

For example, today, I discovered a protein almond drink in the supermarket predominantly made with soy milk and doesn’t come without soy lecithin.

That’s why looking at the ingredient list is an absolute must when it comes to almond milk. As in this case, big brands use heaps of additives.

It took me a lot of time, but I finally found an unsweetened keto-friendly product that comes without additives.

In my opinion, currently, the best almond milk to buy for keto is Gefen Unsweetened Almond Milk.

According to the ingredient list, the bottom line is that it is the only product consisting of water, sea salt, and almonds—finally, without additives.

Nevertheless, the best almond milk for ketogenic nutrition remains the homemade one. This way, you save on industrial processing and know precisely what’s inside.

Forgo the store-bought product. Making homemade almond milk is easier than you might think. All you have to do is soak the almonds in water overnight.

Then, blend the almonds with the water for 2 minutes using a blender. Last but not least, all you have to do is strain the almond milk through a sieve.

And the almond milk is ready for coffee, low-carb desserts, or simply as a drink! 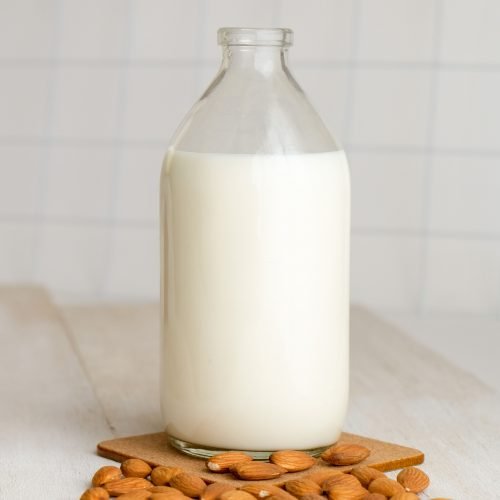 Unsweetened Almond Milk Does Not Kick You Out of Ketosis

Almond milk is sometimes over-marketed. It is not a good source of healthy fats, nor does it contain much protein or essential micronutrients.

Nevertheless, the fact is that it is a delicious, extremely low-carb option, which is why it works so well for the keto diet. You can’t kick yourself out of ketosis with suitable unsweetened or homemade almond milk.

For that, you’d need to drink close to 5 liters of it a day.

In addition, almond milk is a superb option for intermittent fasting. In fact, to the proper extent, it’s the only milk in coffee that won’t necessarily break your fast.

You can find out exactly how this works in my new book Intermittent Fasting 16/8: What Can I Drink While Fasting?

Will almond milk kick me out of ketosis?

Homemade and most unsweetened almond milk varieties won’t kick you out of ketosis.

What kind of milk is OK on keto?

Unsweetened almond milk is the best option on Keto. In this article, you’ll learn how to make almond milk yourself or where to buy it.

What dairy is not allowed on keto?

Milk is full of carbohydrates (lactose or milk sugar), so it is not suitable for Keto. In contrast, high-fat dairy products like cheddar are allowed on keto.

Due to the high sugar content, peanut butter is usually not keto-friendly.

Greek Yogurt on Keto: Is It Keto-Friendly At All?

Monk Fruit Side Effects: Is It Safe for Keto?

Impact of Meat Production on the Environment – Should We Eat Less?